Fall is the best time go for a drive and a hike in almost any part of the country, but this is especially true for Connecticut’s Litchfield Hills region. The Litchfield Hills are technically the southern tip of the Berkshires, which are in turn technically the southern half of the Green Mountains that start in Vermont. Western New England and Eastern New York are where most of the mountain ranges of the Northeast Appalachians converge, and the effect is beautiful.

Did not see any ghosts.

A nice short rendezvous with nature. 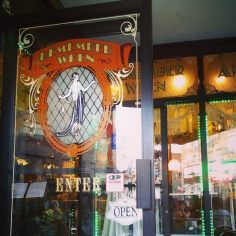 New England is also 80 percent forest — the most heavily-forested region of the country — a fact that can be counted as one of the great environmental victories of the 20th century. Early settlers’ logging and farming had cut that percentage down to 30-40 percent in the mid-1800s.

So what’s there to do in the Litchfield Hills besides “leaf-peep”?