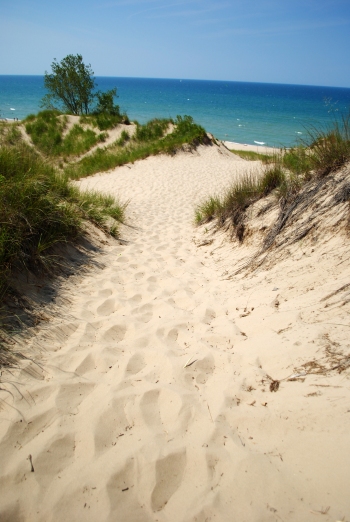 Staring out at another beach this weekend, I finally decided to put down a few words about my trip to the Indiana Dunes in early August.

Being in close proximity to dozens of beautiful, unique beaches — the tumbled-down cliffs on the Sound, the pearlescent yellow sand of the Jersey Shore, and the scrub-topped dunes of the Cape — is probably my favorite thing about living on the East Coast.

My boyfriend and I both work in politics and while what we do is ultimately rewarding, without our hideaway on Cape Cod I’m not sure we’d be able to make it through the frequent stress and petty problems that come with the territory, especially now that we’re in the final stretch. That’s why we went this weekend: Between Labor Day and Election Day, there really is no other opportunity to take a break. 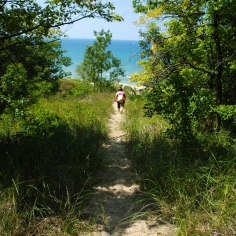 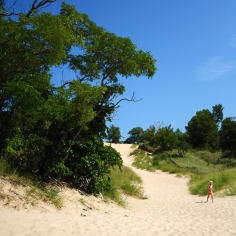 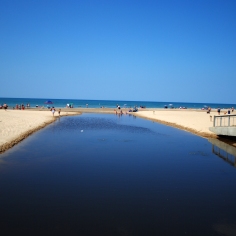 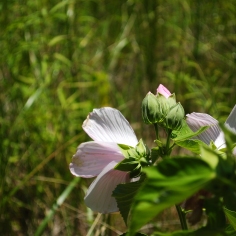 Any guesses on this wildflower? 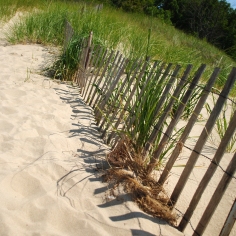 This fence doesn’t stand a chance against the dune. 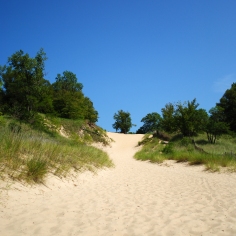 I’ll admit, I couldn’t climb it.

Beaches as psychologically restorative as the ones out here are something I never thought I could find in the old Hoosier homeland. I’m from central Indiana, and while we have some cool, clear watering holes that really hit the spot in mid-August, I’ve never been on any beach there that imbued me with the sense of extreme calm that I get whenever we come to the Cape. The fog lifting over the Ohio river as I would drive down into the valley on my way to work when I lived in Madison, Indiana, is about the closest I’ve come to experiencing a similar feeling related to a body of water in my home state.

Now, I wouldn’t say that I had some sort of religious experience when I visited the Dunes. But I definitely felt that Indiana’s Duneland was a special spot that rivaled all of those beaches on the East Coast in terms of natural beauty. The grassy hills and the white sand are almost identical. But the water on Lake Michigan is so much clearer — so clear you can still see your feet when standing in waist-high water, as if you’re looking through antique window glass. 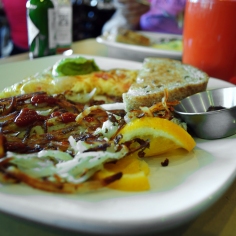 A yummy locally-sourced breakfast at the Third Coast Spice Cafe. 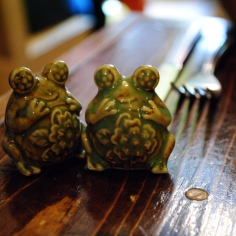 Cute salt-and-pepper shakers at Octave in Chesterton, IN. 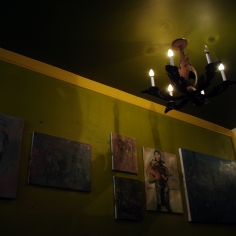 Cuing the ambiance at Octave.

If I had grown up among the Dunes I’m sure I would feel pretty special about them. My friends who are from Northern Indiana talk about the Dunes with the same sort of fascination and reverence that I felt when I wobbled out onto the Provincetown breakwater and stomped through the sandy cranberry bogs along the Cape Cod National Seashore.

Being a Midwesterner in the Northeast I often feel like an informal representative. The people here can be just as provincial as anyone living in Middle America, and sometimes more so. Yankees have a lot of misconceptions about the Midwest, including almost no appreciation of the political and cultural nuances, let alone any geography that exists beyond the endless fields of corn.

When I told my boyfriend that the Duneland beaches rivaled in quality the ones we’re used to out on Cape Cod, he admitted that he had not once thought of beaches when he’d thought about Indiana.

Well, now he will!